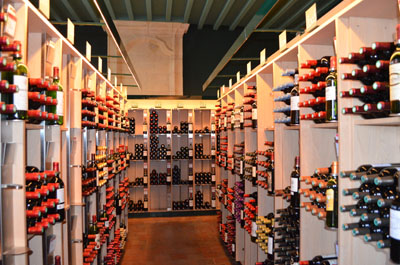 In France, food and wine are one of the most important French Traditions . You can enjoy it in a fancy restaurant or a bistro or in some cases take home to your self-catered cottage.

Traveling to other regions? You might want to check out traditional foods from other areas of France.

France’s temperate climate, the high quality of the food plus the skill of the French chef all contribute to delicious traditional French foods.

Let me add that it used to be that anywhere you ate the food was great. Nowadays it isn’t always that way. So when you travel keep that in mind.

A beautiful long coastline for fish and a fertile inland produces ingrediants for delicious dairy and pork dishes. Lots of apples too for their speciality hard cider cidre. Plus, lamb from the salt marshes of Mont St. Michel.

The beaches in Normandy are beautiful to see as well as the interior and Normandy is not far from Paris.

Most Popular French Foods of Normandy : Dairy products from its famous Norman cattle (the most important breed in France). Milk, cream and butter. The whole Norman cuisine is cream based.

Popular French Foods from the towns of :

French pate, saucissons (sausages), and andouille (a spicy smoked pork sausage served as an hors d’œuvre. A specialty of the town of Vivre).

Tripe: Tripes à la mode de Caen. If you follow the history of French foods you’ll be interested to know this special dish dates back to the 14th century and the less perfected version to Philip I of France.

Host a dinner party and impress your guests with my French chef father-in-law’s easy French recipes.

You’ll see lots of crêperies in Brittany. Crêpes originated in Brittany and you haven’t tasted a crêpe until you’ve had them there. 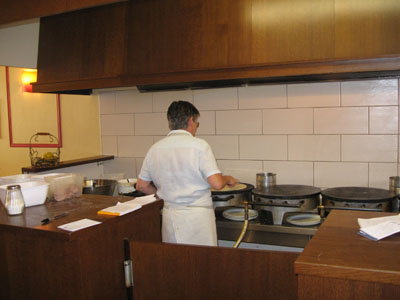 Crêpes being made in Brittany

Served at creperies and in food shops (a good snack to buy when you’re on the road). On the menu you’re choice will be:

Crêpes salées: A buckwheat crepe, filled with egg, mushrooms, ham… Thinly filled with whatever ingredient or combo of ingredients you choose. You eat 2 to 3 and traditionally end with a sweet crêpe for dessert.

crêpes sucrées: a sweet crêpe made with wheat flour. 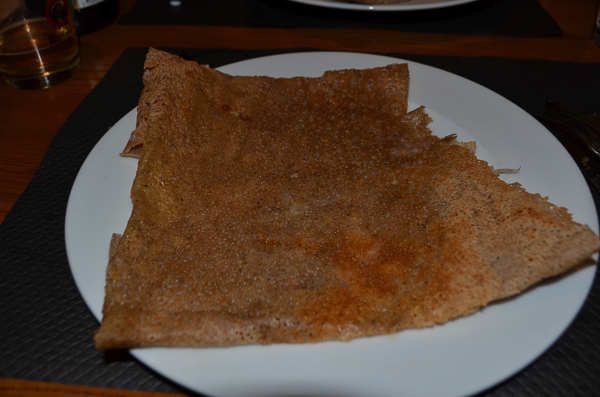 Brittany is also famous for its cidre (hard cider). Some are so good that the first time I thought I was drinking a fine sparkling wine. Traditionally you drink this with your crêpe meal. Nothing at all like hard cider in the states.

Brittany has a beautiful coastline and wonderful seafood which is one of the many reasons why Brittany France is my favorite place. 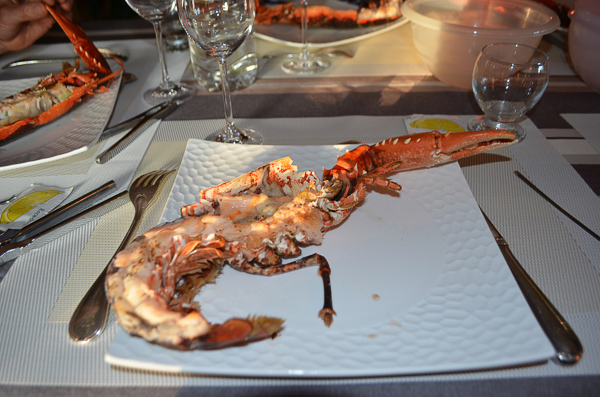 lobster caught by our cousin in Brittany

Sardines from Douarnenez: the best I’ve ever tasted. We bought some at a shop and had a picnic on the beach of sardines and a baguette. Delicious!

Far Breton: a traditional custard-like cake usually with prunes inside.

Petite Beurre: a Breton butter cookie. In 1862 in Nantes was the first French biscuit plant and they produced this cookie. (Nantes used to be part of Brittany France now it’s in the Loire)

Brittany is also famous for its vegetables: strawberries from the area around Plougastel, cauliflower, artichokes, leeks, onions, potatoes and carrots. These vegetables make their way across France into many of the famous French food dishes.

Rillettes: A country French pâté made of minced pork.

Vendée area of the Loire (From the Atlantic coast inland)

Tourteau Fromager: typical dessert cake of the Vendée made with goat cheese. Has a black crust and a soft center.

Chestnuts are used in traditional French Foods a lot. In main dishes… and French dessert recipes.